On the left side panel I have posted a link for order information for a book I am currently reading.

Manifesting Love From The Inside Out.

This book was recently recommended to me by my youngest son's pediatrician. Last year, two days after the birth of my son, I went through a traumatic event from which I am on a journey of healing.

I have had angels all around me guiding and helping me. And I am thankful for each and everyone of you who has held my hand, loaned your shoulder for me to cry on and just treated me with kindness.

Our life is the journey...the journey to center and the journey to self. Just when we think we are there we find that we have more to journey through. I am thankful for my lessons and growth thus far!
Manifesting Love is basically about being who you truly are, a loving and whole person who stands centered in your own personal authenticity.

It is brilliantly, personally and compassionately written. Trust me it is not just another book. 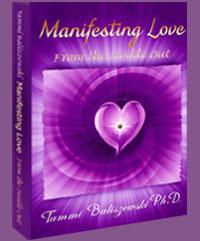 Blessings to Dr. Tammi Baliszewski, Ph.D. for sharing what she has learned and cultivated.
Posted by THNK at 8:35:00 AM No comments:

We should each resolve this year to be the Peace we
wish to see in the world. If each of us becomes mindful
to Be Peace in each situation of our lives who knows
what ramifications that will have.
Reiki Blessings!
Have you self-reiki today?
Posted by THNK at 9:17:00 AM 1 comment:

Happy Gregorian New Year to you!!
I wanted to share this personal finding with you just perchance that it may prove to be of some help to others who have dealt with what I have dealt with for the last 10 years.
Since the birth of my 3rd son I begun to develop symptoms in my hands, my fingers to be exact, that is labeled "Raynaud's Syndrome".
The symptoms include my fingers (and toes) becoming severely reactive to "cool" temperatures. If the temperature hit below 65 degrees the blood vessels in my fingers or toes would severely constrict leaving the extremity white with absolutely no blood circulation. This could happen in the winter, spring or autumn (sometimes summer) even upon opening the refrigerator or freezer door. Grocery shopping in the freezer section was never fun for me!

photo by health topics
The above photo is NOT of my hands of course however my symptoms included white from the tips of my fingers to the base of the hand- the entire finger!
At first only one or two fingers would be affected but eventually all four fingers (I can not remember if the thumb was as well). The fingers would turn cold, white and stay that way for 20 to 30 minutes. After severe numbness and being perfectly white they would then become tinged blue then red and burn as they warmed up again.
These symptoms began around  2000/1. I truly began to absolutely dread winter. As a matter of fact my nose and forehead also seemed to lose some circulation.
Well I was never officially diagnosed but after consulting with friends who were either physicians and physician assistants I was told that this was labeled Raynaud's disease or Raynaud's syndrome.
Raynaud's, from my personal research, can stand alone as a disease or can be a syndrome that can accompany other diseases or disorders.
During my last pregnancy I discovered that I was severely iron deficient anemic. This discovery answered a lot of issues I had been having. But who wants to take iron supplements as we all know what they tend to cause! Wreaking havoc in the elimination system! ;-)
I had discovered an iron supplement that I felt would be good for me but was hesitant to try it because it was a bit costly but then my Nurse Midwife at the birthing center also mentioned the same iron supplement by name.


She said it was what they recommended to all of their anemic patients in order to raise their hematocrit levels. Mine was so low that I risked the possibility of hemorrhaging while giving birth and perhaps needing a blood transfusion.
I purchased the supplement via Amazon.com and in no time  raised my blood levels to where they needed to be all with out the undesirable side effect.  I also had more energy. The energy I had before having children!
Anyway...as surprising side effect I noticed this year is that I no longer have that horrible "Raynaud's Syndrome".

Mind you I would severely feel the effects of cold on my fingers where other people could be gloveless without a thought or flinch.  Trust me, by this time of year I would have been feeling it as I have the last 9 to 10 years.
Coincidence, I do not know. Placebo effect? No, because I had not even thought one bit of the connection before hand. I just happened to notice that temperatures had dropped and that while I was cold I never once had the urge to chop my fingers or toes off!!
Anyway I wanted to share this with anyone, who may suffer from the same, as an option to help.


Floradix Iron supplement has been a part of my daily regimen since about July 2010 so I had been taking it for at least 4 months when I noticed no winter chills!
It is important however before starting any iron supplement even a "natural" one that you get a blood test from your doctor to find out if you are in fact iron anemic.  Too much iron in the system can be severely detrimental just as too little iron.
If you already know that you are iron deficient and you have been distraught with iron supplements because of there constipating effects then this supplement would have no worries.
Consult with your healthcare professional to get your blood test first!


Iron deficiency may or may not be your issue.

May kindness and compassion never cease.

May love know no bounds.

May we be open to accepting more than enough abundance to go around.