Learn to have fun! 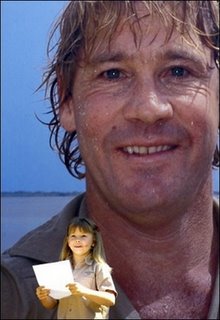 steve irwin who dedicated his life to educating people on conservationism
and that nature and wildlife are important.

i was very sad when i learned of his death. but no need to go into the emotional
details.

i decided not to watch the interview because i knew that teri would be wracked
with mourning emotions and being the empath that i am it would have just
been too difficult to watch or listen. when you feel others pain so intensely
as i do, it can be a very stressful situation to endure.

i acknowledge his death,the pain of it, and most importantly respect the memory
of his life.

well this morning i decided to walk to school with the kids as a great way to start my day.
their school is well over half a mile away.

i came back into the house to turn on Good Morning America believing that they might
have just snippet of the interview or at least babs on there talking about it.

well as soon as i turn the tv on i see teri's face. you can see that the woman was doing
her best to be strong, to be brave and mustering up the courage to go on. the pain
in her face, in her voice….it was intense.

ms. walters asked her what does she miss the most about steve?
teri replied,” i know this is selfish, but what i miss most is steve's ability to have fun. steve taught me that it was ok to play in the rain, to jump in mud puddles. it was okay if the kids got dirty or spilled ice cream on your pants. steve didnt sweat the small stuff because he saw the bigger picture….”

she also said something about she hopes soon that she will be able to have fun again because she is mrs. steve irwin and she has a lot to live up to.

of course when she said that i just burst into tears.

prior to that portion she mentioned that steve believed that if we each did our part in the world to help the world it would all add up. we have to each do our part.

while you are going about your day, your life… doing your part in the world…
please do not forget to have fun. do not forget the 12 year old that you were,
that you are, that you should be. live life with joy, love, responsiblity and most
importantly FUN.
***** 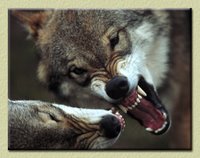 on one of my artist's communities a fellow artists posted this. i found it to be packed full of wisdom so very simply and straightforward.embracing it both because cherokee is part of my ancestral heritage and the spiritual heritage of america and thus the world.

some of you may have heard it before….and even those who haven't…enjoy and may you find something worth of incorporating into your being… be love.

Two Wolves
An old Cherokee chief is teaching his grandson about life:
“A fight is going on inside me,” he said to the boy. “It is a terrible fight and it is between two wolves.
“One is evil - he is anger, envy, sorrow, regret, greed, arrogance, self-pity, guilt, resentment, inferiority, lies, false pride, superiority, self-doubt, and ego.
“The other is good - he is joy, peace, love, hope,
serenity, humility, kindness, benevolence, empathy, generosity, truth, compassion, and faith.
“This same fight is going on inside you - and inside every other person, too.”
The grandson thought about it for a minute and then asked his grandfather, “Which wolf will win?”
The old chief simply replied, “The one you feed.”

photo found on the internet image search.
Posted by THNK at 8:00:00 AM No comments:

The Feminine principle….is…identified with the Divine Presence (Shekhinah), the essence of God that pervades all creation. It is this Essence that is the true beauty of all things. Thus, whenever one contemplates any beauty, s/he must realise that this is the Divine Essence, and can thus make use of it to begin the ascent on the Ladder.
—Nehunia ben Hakanah (trans.AryehKaplan)

The most direct means for attaching ourselves to God from this material world is through music and song.
—-Rebbe Nachman of Breslov
Posted by THNK at 12:10:00 PM No comments:

on my drive home i spotted the most beautiful
blood orange full moon...

it took my breath away and almost got me in trouble
on the highway...i was so busy looking at it i nearly forgot
i was on the highway.

something about a full moon.... very big.... almost like a soft
tangerine i could pluck from the sky.

hanging so low....to me its like a bracha (blessing)....its so beautiful.

and at one time a wisp of clouds traced over it....

i wish i could just get naked and bask in the light of the full rich moon
and dance... or just lie there on a blanket....

but my backyard isnt private so for now i must act civilised.
Posted by THNK at 9:30:00 AM No comments: