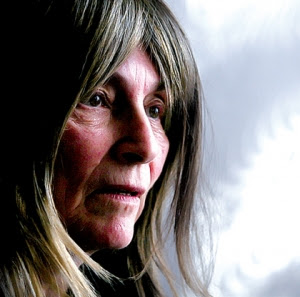 
SANTA CRUZ — As she lay dying on the bed inside her Santa Cruz home, her last words were, "It's better now."

And with that, Shekhinah Mountainwater, a key figure in Santa Cruz's alternative spiritual culture, died Saturday after battling uterine cancer for more than a year and a half.

She was surrounded by friends and family. On Monday they recalled her impact. They said it was not only in the way she lived her life, but in the way she left it: courageous in the face of pain. Then, finally, peacefully.

She was a healer, a tarot reader, a teacher, a singer, a musician, an author, a goddess, a pagan, a witch.

"The good kind of witch, not the bad kind," her friends and family pointed out Monday, occasionally motioning to her body, which lay a few feet away inside a plain wooden coffin in the backyard; occasionally they spoke to her.

"She was dedicated to her work and changing the world," said son Frey Faust, who followed in his mother's artistic footsteps by becoming a dance teacher. "She was a creative mother, and she was very disciplined as an artist herself. Nature was important to her. Values were important to her. She was never interested in monetary wealth"

While thousands of Santa Cruz residents could fit that very description, what made Mountainwater's life so interesting is that she dedicated her life to empowering women long before it became fashionable.

And she never let up.

And it wasn't a political movement along the lines of feminism, although that was certainly important to her.

It was a spiritual movement — one whose roots can be traced to an ancient time, long before Judaism and Christianity "came to be," said daughter Angel Brandwein, who, as a child growing up in Ben Lomond, would sing and dance with her mother and older brother in front of the old Cooper House in downtown Santa Cruz.

"She was always at the forefront of any new movement whose purpose was to enlighten and unravel the patriarchal regime," said Brandwein, who now lives in Phoenix and works at Arizona State University. "She was the original beatnik, the original hippie; she was always anti-establishment"

She sang and played acoustic guitar in the same coffee houses as Bob Dylan, Joan Baez and Joni Mitchell in the 1960s in New York's Greenwich Village, before eventually moving to Los Angeles in the early 1970s, then settling in Santa Cruz, where she lived for 35 years in the same house on Effey Street.

Born Ellen Adler on Oct. 24, 1939, she was raised in New York and attended Bard College for a few years before she set off on her own in an attempt to become a folksinger.

Over the course of her life, however, Mountainwater would adopt a long line of names before settling on her final one, Shekhinah — "the female aspect of god in ancient Judaism," her daughter said.

"Her name changes represented her journey in life at the time and the discovery of a new part of herself," she added.

In 1991, she wrote "Ariadne's Thread: A Workbook of Goddess Magic," a book about feminist spirituality and magic.

"You may have heard of the five steps or keys to magic," she writes. "See, know, will, dare and keep silent. Those correspond to the five elements of the witch's star, as spirit, mind, action, emotion, and body"

Or, perhaps, a more prophetic line would be this one: "Great are the life forms that let us eat them/Some day our bodies too will be food/Great is the goddess who makes things so yummy/Great is the woman who cooks it so good"

In December 2005, however, Mountainwater was dealt a blow when she was diagnosed with cancer. Soon, she found herself having to mix alternative methods of healing, such as herbs, massage and acupuncture, with modern-day practices such as chemotherapy and radiation.

The chemotherapy may have taken her beautiful hair, friends say, but it didn't take her soul, or her fire, or the goddess within her.

What neighbor Cindia Boyle said she will miss most of all is their day-to-day friendship.

"She was always here," said Boyle. "And now she isn't"